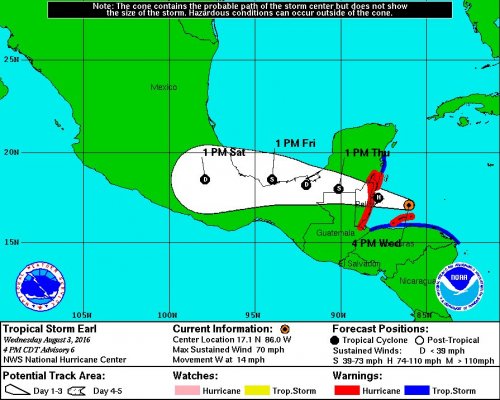 Tropical Storm Earl strengthened to a hurricane Wednesday as it approached Belize and southeastern Mexico, bringing up to a foot of rain and the possibility of floods and mudslides, the National Hurricane Center said.

A hurricane hunter plane reached the storm Wednesday and confirmed that the storm had maximum sustained winds of 75 mph, making it a Category 1 hurricane, the hurricane center said. The storm system is about 150 miles east of Belize City and was moving west at around 14 mph.

The hurricane is expected to make landfall late Wednesday or early Thursday, and could bring 8 to 12 inches of rain to Belize, Honduras, Guatemala and the Yucatan peninsula of Mexico through Thursday night, the hurricane center warned.

Isolated areas of Belize and Mexico could receive up to 16 inches of rain. "These rains could result in life-threatening flash floods and mud slides," the hurricane center said.

Belize's national emergency management organization was setting up shelters and warned residents to be prepared to leave, the government said in an advisory. Storm surges of 2 to 4 feet were anticipated and flooding was called likely.