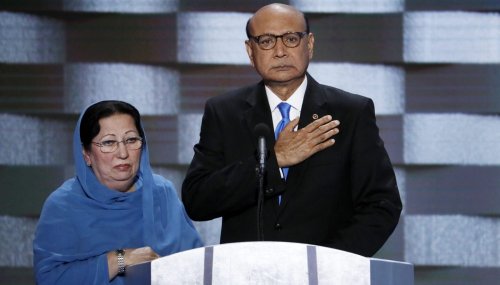 Since entering the running for US president, Donald Trump has been endlessly criticized by high-profile public figures including Barack Obama and the Pope.

Yet, none of these criticisms have dented his success as did the words of Khizr Khan, the father of a fallen Muslim soldier whose touching speech at the Democratic National Convention condemned Trump’s racism and hatred of Muslims, igniting a firestorm of political debate.

Trump’s insulting response (on Twitter as well as in an interview) to both Khan and his wife Ghazala, who had taken the stage with him at the convention, crossed the line even for Republican party loyalists. Families of other fallen American soldiers demanded an apology; prominent Republican leaders including former Republican presidential candidate John McCain lashed out at Trump; and polls reflected the damage done.

How could an everyman like Khan do more to undermine Trump’s popularity than all the prominent figures who have tried before him?

The answer is rooted in how populism works, says Federico Finchelstein, a professor of history at The New School who is writing a book about the convergence of populism and fascism. Trump has all the qualities that make populist leaders powerful, but also all the qualities that limit them. At the core of populism, Finchelstein says, is “the belief to know better than the people what it is that the people want.” This results in a very authoritarian version of democracy, wherein the candidate doesn’t just speak on behalf of the people—he speaks for them. He identifies “the people” not as all citizens, but only those citizens who agree with him. In Trump’s case, “the people” does not include Muslims, Mexicans, or members of other groups he has disparaged.

Populism, which borrows heavily from fascism, has bubbled up in the post-World War II era in response to the rise of democracy. Historians, Finchelstein says, agree on a few core traits typical to populists: They use democratic ideals to legitimize a non-democratic style of leadership that delegates all power to them; they divide society into two camps, “the people” and “the elites”; they are proud anti-intellectualists; they reject culture and knowledge in favor of instinct; they promote polarization and demonize their opponents (in a recent example, Trump called Clinton “the devil”); they undermine judiciary, military, and political powers; and they antagonize the free press.

According to Finchelstein, Trump is the first major-party US presidential candidate to exhibit all these traits, which Juan Perón, Silvio Berlusconi, or even Benito Mussolini did before him. “He is at the forefront of xenophobic, far right populism,” Finchelstein says.

That Trump claims to be of the people but cannot resist attacking one reveals his hollow thinking. Khan is not part of the country’s elite, nor a politician. He is not a representative of a faceless, institutional enemy like “the media.” He is a father, grieving the loss of his son, who 12 years ago gave the ultimate sacrifice for his country.

For those of Trump’s followers who cannot dismiss the candidate’s vicious attacks on Khan as merely “Trump being Trump,” the comments show “that the emperor is naked,” says Finchelstein. They show that “his bare form of aggression” doesn’t just hit elites; it can be used against any decent American who questions his merit.

Critics like Khan undermine what drives populist success: apathy about a candidate’s divisiveness and threat to society. The remedy is more meaningful political participation by citizens, which encourages people to speak up, rather than being spoken for.by Annalisa Merelli