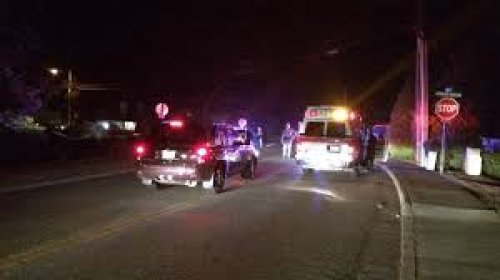 MUKILTEO, Wash. -- Three people were killed and one person was wounded in a shooting at a party in Mukilteo early Saturday morning.

The gunman fled the scene but a suspect was arrested about two hours later in Lewis County, according to Mukilteo Police. The wounded victim, a man, was taken to Harborview Medical Center in Seattle but his condition is not known.

About 15-20 people were partying at home in the Chennault Beach neighborhood when gunfire broke out around 12:30 a.m., according to Mukilteo Police. No other details about ages of the victims or what was happening in moments leading up to the shooting have been released.

"My granddaughter called us about 20 minutes after midnight that she was hiding; that there had been a shooting and that two of her friends were shot and she was shot at," said Susan Gemmer. "We jumped out of bed, got dressed and got in the car as fast as we could." Gemmer said her granddaughter was OK, but in shock.

Police say the gunman was gone when officers arrived, but interviews from those at the scene led them to identify a suspect and a vehicle. A trooper with the Washington State Patrol spotted the suspect's car about two hours later on I-5 South near Chehalis and pulled the driver over, taking him into custody without incident. His name has not been released.

Police have sealed off the neighborhood where the shooting took place, establishing a meeting place for parents and relatives at the nearby Church of Latter Day Saints on Harbour Pointe Blvd.

"Tonight our community has been shaken to the core," said Mukilteo mayor Jennifer Gregerson. "We grieve with the families who have lost those in this horrible event."

Several police agencies from around Snohomish County are helping with the investigation, including officers from Brier, Edmonds, Lynnwood, Mountlake Terrace, as well as deputies from the Snohomish County Sheriff's Office and troopers with the Washington State Patrol.