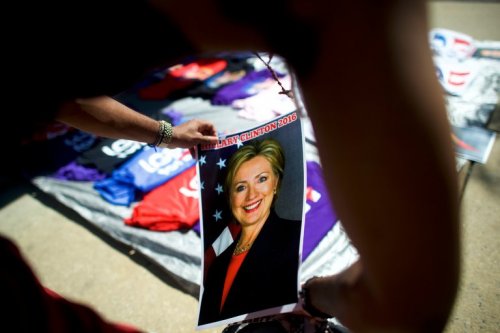 Computer systems used by Hillary Clinton’s presidential campaign were hacked in an attack that appears to have come from Russia’s intelligence services, a federal law enforcement official said on Friday.

The apparent breach, coming after the disclosure last month that theDemocratic National Committee’s computer system had been compromised, escalates an international episode in which Clinton campaign officials have suggested that Russia might be trying to sway the outcome of the election.

Mrs. Clinton’s campaign said in a statement that intruders had gained access to an analytics program used by the campaign and maintained by the national committee, but it said that it did not believe that the campaign’s own internal computer systems had been compromised.

The Democratic Congressional Campaign Committee, the fund-raising arm for House Democrats, also said on Friday that its systems had been hacked. Together, the databases of the national committee and the House organization contain some of the party’s most sensitive communications and voter and financial data.

Meredith Kelly, a spokeswoman for the congressional committee, said that after it discovered the breach, “we immediately took action and engaged with CrowdStrike, a leading forensic investigator, to assist us in addressing this incident.”

The attack on the congressional committee’s system appears to have come from an entity known as “Fancy Bear,” which is connected to the G.R.U., the Russian military intelligence service, according to an official involved in the forensic investigation.

The same arm of Russia’s intelligence operation was also implicated in the attack on the national committee, in which it gained access to opposition research on Republicans, including the party’s presidential nominee, Donald J. Trump.

“It’s the same adversary,” the official involved in the forensic investigation said. “These are sophisticated actors.”

The F.B.I. said on Friday that it was examining reports of “cyberintrusions involving multiple political entities” but did not identify the targets of the attacks.

The Clinton campaign used the program that was hacked to analyze voter data, but it did not contain voters’ Social Security numbers or credit card information, a campaign aide said. The campaign said it was confident, based on a review by outside experts, that getting into the program would not have allowed the hackers to gain access to the campaign’s internal emails, voice mail messages or other data.