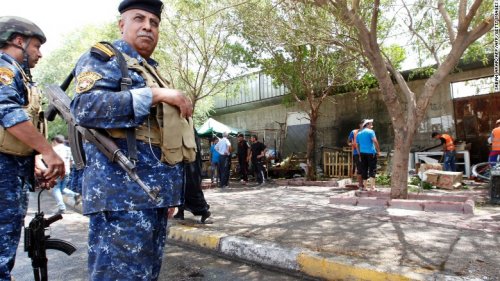 ISIS claimed responsibility for the attack on the predominantly Shiite neighborhood of Kadhimiya, which also injured more than 35 others, Iraqi security officials said.
The claim by ISIS was released by the terror group's media wing Amaq and on pro-ISIS social media accounts circulated by its supporters.
Sunday's attack came just weeks after the deadliest terror attack in war-weary Baghdad in years, when a suicide truck bomb plowed into a busy shopping district killing almost 300 people.
The bomb-laden truck smashed into a building housing a coffee shop and stores shortly after midnight, when the surrounding streets were packed with people who had been gathering after breaking their Ramadan fasts.