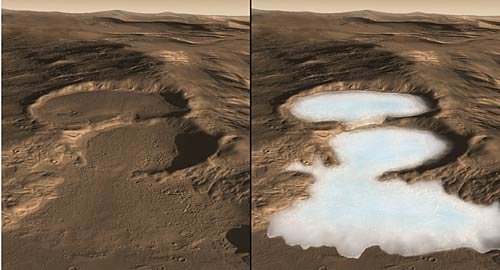 Scientists analyzing Martian topography have seen lots of evidence of water-caused erosion on the planet, but until now the only deposits of ice have been seen at the poles.

One of the glaciers has been estimated as being the size of Los Angeles and as much as half a mile thick.

How did the ice get there? The best guess, said John W. Holt, a researcher for the Institute of Geophysics at the University of Texas, is that climate change was brought on by changes in Mars' rotational axis over time. Because Mars doesn't have a large moon to keep its axis relatively stable, as the Earth does, the planet can tilt dramatically, redistributing the sun's heat and energy and shifting the poles around.

These icy deposits may have lain hidden in their current state as long as 200 million years, Holt said.

The discovery wasn't a complete surprise. Scientists had previously noticed rocky debris "aprons" that seemed to flow away from steep hills as if something underground was lubricating their movements. But there was no proof what was going on until the Mars Reconnaissance Orbiter's Italian-built radar confirmed the presence of large ice structures.

The discovery could be one of the most significant for those who want to see a manned mission to the Red Planet, a goal that was announced by President Bush in 2004 but has since been quietly de-emphasized by NASA.

Knowing that astronauts could obtain water in the more temperate regions would probably make the mission more feasible.

It is still unclear, however, whether the water is accessible from the surface. Holt said the radar measurements indicated that it could be covered by as much as 30 feet of debris.

Johnson is a Times staff writer.